One of the earliest documentations about the purpose of massage and acupuncture is in the Chinese classic Documents of Internal Medicine, dating back to 2300 BC. This is an imperial report giving an overview of healing, body repair and body maintenance. The information for this document was gathered from diverse sources such as:

Taoist cloisters which had collected medical and anatomical knowledge. Some monks practised medicine mostly within a philosophy of the purpose and function of life. They created early theories of how to keep a body healthy. There were also military orders who developed armed and unarmed combat. That required very practical knowledge of massage to prepare the body for fight and take strains away after exercises and conflict. There was also a system of private medical practitioners using a mix of herbal knowledge, faith-healing and manipulation. Sources also mention people we now would call beauticians, who used oils and creams to keep the skin healthy and bodies supple and attractive.

Earlier than in the west China had medical practitioners. They worked for the well-to-do and the military. But there were also what we now call bare-foot doctors helping farmers, miners, brickmakers, fishers and transport workers. Immediate help through manipulation was then, as it is today, a very successful practice. We have very descriptive details of the theories underpinning the practice of Tui-Na and other manipulation techniques such as acupuncture dating back to the Shang Dynasty of China, 1700 BC. 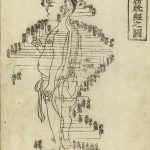 Evidence of the existence of these types of manipulation of the body are far older, written on so-called oracle bones. However, these do not give much detail about the practice except that it was used to maintain bodies and mind through healing spiritually and physically with massage and later acupuncture. Whole cultures of formal and informal and alternative practice emerged. The Chinese government in the 1950s made great efforts to bring these together with what is known as western medical and paramedical practice. The result has been a worldwide movement to codify Chinese alternative medicinal practice, including Tui-Na, through national and international organisations.

The principles of Tui-Na and acupuncture

Tui-Na is based on a theory of a pattern of defined energy lines in the body called meridians. Of these six are Yan and six Ying. This pattern describes the routes of our vital life energy called Chi or Qi which drives each organ and each cell in our bodies. Keeping the Qi force strong and unimpeded is the purpose of Tui-Na and acupuncture. Blocked or badly working meridians are stimulated so that the natural ability of the body can rebalance itself. Modem researchers of traditional Chinese healing have described Qi in terms of electromagnetic energy. Qi flows around the body in the channels set out by the twelve meridians which form a network of energy throughout the body. Each meridian is related to, and named after organs and functions such as carried out by the lung, kidney, gall bladder, stomach, spleen, heart, small intestine, large intestine, bladder, etc. When Qi flows freely through the network of meridians, the body is balanced and healthy, but if the energy becomes blocked, it can result in physical, mental and emotional ill health. This balance between Yang and Yin is often depicted by this symbol 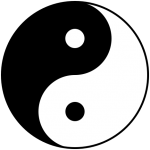 In all traditional Chinese hospitals, there are Tui-Na wards, where doctors of medical massage and acupuncture treat patients for joint and muscle pathologies. Tui-Na is a highly refined system of medical massage designed to treat problems such as: insomnia, hypertension, headache, toothache, stomach ache, etc. A more focussed process which requires far more training is done through acupuncture which developed from massage techniques following the principles of Qi stream stimulation. At Chinese hospitals Tui-Na and acupuncture are one of the most popular treatments because it is very effective. Tui-na massage with and without oil can be done light or deep tissue style. It combines pushing, rubbing, and tapping the body’s muscles, using acupressure points along the meridians.

Placing needles on the points of the meridians creates a very precise way to influence the Qi in addition to the use of only fingers and hands. However, acupuncture requires additional knowledge and skill. In our practice we put needles mainly on the ear, finger and sole of the foot. The precise choice of these points reduces or eliminates the blockage of Qi-blood, so it can be discharged from any part of the body. The physical basis of all human life activity is through Qi within blood and lymph circulation systems. The function of Qi is scouring passageways through the moisture nurturing and cleaning the viscera and other organs of the whole body. Dispelling Qi blockages does not do any harm. Pain and other symptoms can be alleviated and cured. Results are immediate but need to be embedded by repeat treatments. A harmonious balance of Qi in the body restores the natural state of Yin and Yang. It is an amazing therapy to achieve and maintain good health.